Who Are the Oppressors? : by LuciferWar.com 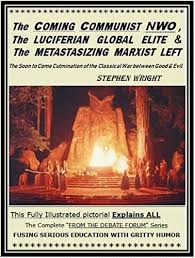 Mexican Americans are proud of their heritage; their people were the Mayans and the Aztecs, the greatest astronomers the world has ever seen. Their people were so advanced in science and mathematics they made calendars thousands of years ago more accurate than our modern calendar.

African Americans are proud of their heritage; their people were pharaohs and biblical heroes we read about in the Old Testament. is home to the greatest building ever built upon this Earth, the Great Pyramid.

Sino Americans are proud of their heritage; their people built the Great Wall and ruled this Earth for a thousand years. Chinese mariners explored the entire globe 500 years before the Europeans.

Italian Americans are proud of their heritage. The was unmatched in technology, architecture, art, and high culture for over 1400 years.

It’s okay to be proud of your ancestors, no matter what your background is.

Slavery is coming from the elitist uber-wealthy, the billionaires. The super-elite classes send their children to Harvard, or Yale, where they learn how the masses are a commodity, to be harvested. They learn how to profit and thrive off of the suffering of the masses. They study Machiavelli like a bible and learn how to divide and conquer. We are talking billionaires here, not millionaires; the millionaires are actually part of the solution not the problem. In today’s world one need only look to the top of the pyramid where the satanic, pedophile snobs live, who play a never-ending game of real live chess with the peoples, the nations, the religious groups and ideological groups which make up society. 95% of our problems in this world are disruptive projects the elite cook up to keep us ill, angry, broke, confused, depressed and off balance. People, it’s not the middle class or even the upper class millionaires who are oppressing us; it is the billionaires who espouse the teachings of Alistair Crowley. That is where the oppression is coming from and if you can’t see it, you haven’t looked.

Posted by LuciferWar at 1:23 PM