The Truth About Kratom: by Joel the K 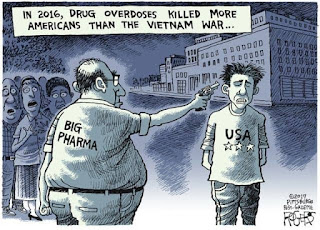 On April 16nth the New York Post reported that kratom was linked to 100 overdose deaths in an 18 month period. (1)

If you look at my reference links below this post and go to the government report which The Post referenced, you will see that only 7 of the 100 overdose cases tested for kratom alone. The other 93 cases had street drugs and prescription drugs in their system. (2)

In spite of these facts, the mainstream media under pressure from multi-billion dollar drug companies, will attempt to mislead and scare the public into banning kratom. Kratom is the crushed leaves of a tree which grows in southeast Asia. Kratom is a tree. If I make any claims about what kratom may or may not do, it will be considered a criminal act. But know this: Big Pharma isn't making 100 billion dollars per year by selling kratom, because it grows on trees.

Posted by LuciferWar at 9:27 AM

Excellent information on your thank you for taking the time to share with us. Amazing insight you have on this, it's nice to find a website that details so much information about different artists.
Apex Kratom

Great article, very useful and explanation. Your post is extremely incredible. and if anyone looking to Buy Organic Kratom in USA at an affordable price, then botanicalremediesllc.com is the best choice.